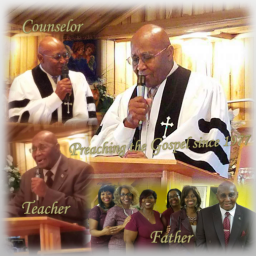 Elder W. E. Whitfield
Founder and pastor of Jesus Saves Missionary Baptist Church for over 44 years before his passing on February 6, 2022

Elder W.E. Whitfield was born in Jacksonville, Florida, and professed Christ at an early age. His love of the Gospel led him to travel all over the country singing God’s praises.  Those travels led him to Northwest Indiana in 1953.

Pastor Whitfield became a deacon at the Cornerstone M.B. Church in 1965. He served faithfully as a deacon until God desired to elevate him higher. In September of 1976, he was called to preach. On March 27, 1977, Elder Whitfield was ordained as a Minister for Christ by the late Rev. James Jones Jr. at Cornerstone. He remained there as Assistant Pastor until he was led by God to organize a church.

Through Pastor’s great leadership, the Jesus Saves family purchased our current house of worship after starting out in a community center.  The church was able to burn the mortgage in just two years. Since that time, Pastor Whitfield has led us in continually improving our church home without incurring debt.

Pastor Whitfield was anointed with a vision to organize a bus ministry. The bus ministry has flourished and through it, Jesus Saves has been blessed tremendously. Over the years, four buses have been purchased and paid in full.

This free website was created with Grace Church Websitesand is sponsored by TicketNetwork.